When chlorides (or other contaminants) are a problem, HoldTight® 102 is a cost effective and reliable solution. If Flash Rust is an issue, HoldTight® 102 is THE answer. Cost Conscious? Check out our dilution ratios and consult us for estimating assistance. Using UHP? HoldTight® 102 will end the “good rust” vs “bad rust” dilemma and, used properly, will work with any equipment. If Coating Compatibility is a concern: ask Ameron, Carboline, Dampney, Hempel, Keeler & Long, PPG, Sherwin‐Williams, Sigma, Tnemec, Wasser or most any other coating supplier and compare to other products: no nitrates, no phosphates, no solvents, no film, no residue, non‐acidic, neutral pH when applied. HoldTight® 102 has been tested for compatibility with many different types of atmospheric and immersion service coatings. Pull test values [p.s.i.] for typical coatings in a number of major categories are shown below. Contact us for more.

NOTE: Some of the tests were performed with an Elcometer 106 manual pull‐off adhesion testers with a range of 0 to 1,000 psi. Automatic pneumatic or hydraulic testers give higher adhesion test results.

Independent tests confirm that HoldTight® 102 removes chlorides (and other contaminants). It then prevents flash rusting, a simple and obvious indication that the surface is clean and ready for coating.

SSPC‐TU 4 Field Methods for Retrieval and Analysis of Soluble Salts on Substrates sets out guidelines for testing for soluble salts in the field. NYC DoT conducted its tests at a Brooklyn site in accordance with these SSPC guidelines.

All test samples were taken using the ISO 8502‐6 Bresle Sampling Method, as described in SSPC‐TU 4, Section 3.3 ‐ Adhesively Bonded Cell. Then, three different SSPC‐approved test procedures were used to determine the soluble salt levels on the test samples before and after the application of HoldTight® 102, as recommended by the manufacturer. In principle any one of the three procedures would have been sufficient. NYCDoT staff used all three, however, as a multiple cross‐check of the results and to confirm with a high degree of certainty that HoldTight® 102 would effectively remove chlorides.

The substrates tested were severely corroded steel coupons, approximately 2” thick, cut from bridge structures removed during repair operations. In each test the sample was first dry blasted. HoldTight® 102 was then used in a potable water wash down at 500 psi, 1‐2 gpm, one part HoldTight® 102 was used with 50 parts water. (Note, the manufacturer recommends this 50:1 dilution of HoldTight® 102 as a starting point, especially with dry blasting. In practice, users report similar results with 100:1 to 200:1 dilutions depending on the condition of the surface and the method of surface preparation used. Typically, the more pressure and water used in surface preparation, the less HoldTight® 102 per unit of water needs to be used to achieve zero or undetectable levels of chlorides.) The three tests were as follows:

Simply put, if flash rust occurs after surface preparation ‐‐ even by a method intended to reduce or remove salts ‐‐ you cannot be sure the surface is clean enough to coat. After working with the water* to remove contaminants, HoldTight® 102 then rapidly evaporates. HoldTight® 102 does not evaporate until after the water evaporates. HoldTight® 102 interferes with the reaction of oxygen with the iron, then evaporates, leaving a clean, contaminant free surface that is idea for coating. But if hygroscopic (water‐attracting) contaminants of any kind remain on the surface, even this quick drying action would not prevent flash rusting. That’s because those suckers pull moisture out of the air, then they react with the oxygen in the air and new moisture to cause rust.

So, if the surface rusts, you may or may not have contaminants. Even if you test for chlorides and other salts and find none, the results may only apply to the specific area of the test. Contaminants may not be spread uniformly across the surface. The fact is that rust, no matter what its cause, is typically inconsistent. On the other hand, if the surface does not rust, you can be very confident that it is both contaminant‐ and moisture‐free. Over time, of course, contaminants carried in the air re‐contaminate the surface and then pull moisture out of the air to cause rust. Then you lose your window for coating. With HoldTight® 102 that window is usually 2 to 5 days.

It cleans, but you don’t have to rinse it off. HoldTight® 102 is NOT applied any more that you would “apply soap” to wash dishes. Like a detergent it adds to the natural cleaning power of water. It doesn’t convert or chemically alter contaminants that cause flash rust, though it does cut grease. When used at the recommended pressures in a stream of water it removes contaminants, both those that were on the surface before the blast (abrasive or ultra‐high pressure) and those that were created or freed‐up by the blast.

The best analogy is soap. Suds (foam) are fun but they don’t clean ‐‐ scrubbing with soap and water cleans ‐‐ soap in a dishwasher with proper water flow, agitation, etc., cleans even better. Dip a dirty dish in soapy water and some grease and food residue will be removed; scrub a dirty dish with a sponge or brush with soap and water and you will remove more; use a dishwasher ‐‐ with detergent ‐‐ and you will generally remove it all. Using HoldTight® 102 and water in a pressure washer is similar to using a dishwasher to clean.

And here’s the bonus: clean surfaces simply don’t rust as fast. HoldTight® 102 prevents flash rust not by forming a film to separate the surface from air and humidity, but by leaving an exceptionally clean surface. Contaminants of any kind – visible or invisible – literally suck moisture out of the air, like sponges. To be a bit crude, but clear, about it, HoldTight® 102 remove’s those suckers. Because HoldTight® 102 evaporates with the water in which it has been dissolved, it does not leave a residue as do some salt removers and virtually all conventional “inhibitors.” It does not solve one problem by creating another.

One of the most common misconceptions about HoldTight® 102 salt remover / flash rust preventer is that it can be “sprayed on” or otherwise applied like a coating. NOT SO! Sure, it is physically possible to do so, but its effect on the surface if used that way will be of little value. And if it is “put on” this way at full strength (i.e., without at least a 25 to 1 dilution of potable water to HoldTight® 102) it may be a problem for some coatings.

The key to using 102 effectively is to dilute it properly AND to pressure wash the surface with the water + HoldTight® 102 fluid ‐‐ we say “treated water” ‐‐ the more pressure the better but the water volume need not be greater than 1 gallon per minute – a common flow rate for pressure washers. Higher pressure improves performance, higher volume doesn’t help or add much: Most off‐the‐shelf pressure washers (at Home Depot or Lowe’s, for example) can easily generate 1500 P.S.I of pressure with a flow rate of 1 gallon per minute. Industrial washers can go much higher, 5,000 P.S.I. or above, and they are more efficient. Heating the water will improve performance, but is not essential.

Why are pressure and flow important? Simply because HoldTight® 102 is a cleaning agent, a surfactant-like high efficiency detergent, but UNLIKE conventional soaps or detergents, it leaves no residue if allowed to evaporate with the water that contains it. Forcing the water with the HoldTight® 102 into the profile or pores of the surface results in more thorough cleaning. When the surface is dry, the HoldTight® 102 is gone. There is nothing to remove. You are ready to apply your primer or coating, or you can wait several days without seeing flash rust. 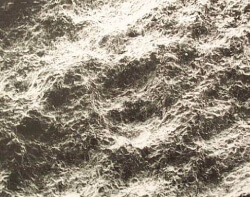 Surface profile showing no contaminants at this magnification level 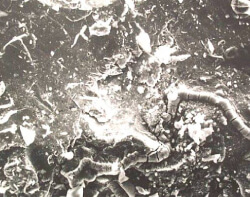 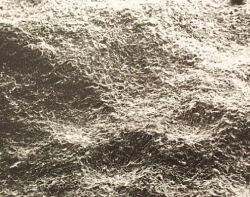 Surface profile showing no contaminants at this magnification level

500x magnification of a steel plate wetabrasive blasted with HoldTight® 102 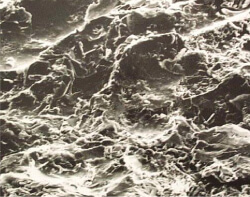 Surface profile showing no contaminants even at this magnification level